Home Beadwork Interview with Teri Greeves: Part 2
  
By Four Winds Gallery Beadwork Contemporary Jewelry Interviews Kiowa Native American Artists October 28, 2013
While speaking with Teri, it became clear how her creative process and work reflect the importance of Native American history and education on both a personal and wide scale level.  In the second part of our interview, we discuss the representation of Native Americans in mainstream culture and the art world, and the very universal concern for the type of world we’ll leave for our children and the generations that follow us.
You made an interesting point about hoping to educate people, drawing them in through art.   In some of your bio information you talk about the use of the Sunboys — wanting that superhero story to be told for your sons.  Were they able to engage with that right away or did it take some time?

All of my beadwork starts with drawings first.  I simplify them down, as simple as I can make it as line drawings, almost like a coloring book.  Then I work my color in and my lines in and all of that.  When my sons were really little, I made copies of those drawings on the computer and gave them to them as coloring pages.  My idea was that just like any coloring book, or any kind of engagement with a child, that if they interact with it, they don’t even know that they’re learning from it.

That’s how our calendars work, those old Kiowa calendars.  All pictoral calendars work that way – people draw them and then by engaging with the events they depict, they come to appreciate the history. I feel like all of my pieces are like those calendars. It’s an event, it’s a thing that happened. Oral history has often been shared with the help of images. We didn’t have written languages so visual markers helped remind us of stories. That is what my intent was with the Sunboyz work I have done. People can read those shoes and know that is Grandma Spiderwoman, that’s the half-boys, and that’s the lightning bolt that struck them down. 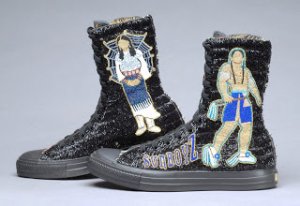 I wanted my children to be able to read the story. So far, so good. All you can do as a parent and as an educator is introduce them to it. You talk to them about it and engage them with it in some way, and then hopefully it sticks.  In the traditional form of learning – of Native learning – we live, a child shows interest in something, we encourage it, and then we let them go.

We have a photo of the piece Fancy Dancin B’ballers… in which you beaded a pair of high-heeled sneakers.  People seem surprised at seeing beaded Native American imagery in a modernized context.  Which can be perplexing, because of course Native American culture has always been very much alive.

I’ve been battling that battle since my first breath on this planet.  I’ll never forget in high school, I was in high school, my American history class, like a good little American kid, and there was literally one paragraph in the 1800s that talked about Native America in my history book.  One paragraph.  And it was one of those big American history books.  And I remember I read it like ten times, and I remember thinking, “This can’t be it.”  I remember going to my history teacher and asking, “Why is there only one paragraph about Native History in here?”   The high school I went to was about 16 miles off one of the largest reservations in the United States, Wind River in Wyoming.  I grew up with my parents, and even though my father is white, we were Native, and we lived on the res[ervation] and all our good friends were Native – so in my mind I was like, “How do they not know this stuff?”

And then as I got out into the world — to California and to college –I really realized, “Alright. We don’t exist.  We don’t exist in American history, we don’t exist in American culture outside of stereotypes.  We just don’t exist.”  Fighting that idea that we don’t exist, that we haven’t existed, that we’re not important to what is America, will be something I will do for the rest of my life.  Every single time I make a piece in which I show modern day Indians, I force the viewer to consider that we do still exist.  And I know, I’m obviously not the only Native person that has dealt with this.  This is something that happens across Native America, across the board.

In your piece NDN Art you directly reference Lichtenstein’s Art! – I found it fascinating that you chose to include a very identifiable Native American figure while Lichtenstein’s iconic piece uses a disembodied voice. Can you speak more as to how you came to that decision to include the figure for the piece?
Basically, that piece came out of the popular question that interviewers were asking all the Native artists: “Do you consider yourself a Native artist or an artist?”  That was the question asked of every Native artist in every single interview that year [2006]. It really stuck in my craw. I wanted to reply, “I am both. How about that?”  I am a Native artist, my subject matter is Native, I have a Native story to tell — I can’t be authentic without telling that story.  However, I would also like to consider myself an artist and not be pigeonholed or ghettoized into some sort of anthropological definition of what Native art is.

Lichtenstein did that specific piece because at that time, they were asking themselves the same kind of question – What is art? What does it mean?  And the bottom line of that question of are you a Native artist or are you an artist, the real question is:  Are you making art?

I thought “What is Indian Art?” was an invalid question from the get-go.  It just means that you don’t have an understanding of what we do, and how it’s placed in the continuum of art on the planet.  I wanted to subvert this question and make it mine, and to do this I wanted to use stereotypical Native imagery – a war bonnet. Are we a stereotype? Am I traditional?  I’m traditionally beading; however, I’m beading in neon colors, referencing Lichtenstein.  It was one of those things where hopefully everything about the piece questioned every single thing that tried to define it.

You have been involved with the ambitious new publication First American Art.  What drew you to it, and are you going to pursue more projects with them?
[The editor] America Meredith has been a friend of mine for several years now. She is one of those amazing people who are driven by the thought, “Let’s do it all.”  Why aren’t Native Americans writing their own critiques, why are we always letting others critique and write the theory for our pieces? We know that we could do it ourselves.  We are so many generations now into college education: my mother had a little bit of college, I’m a graduate, my kids are going to be graduates, too.  And we don’t have an excuse anymore for not writing for ourselves. 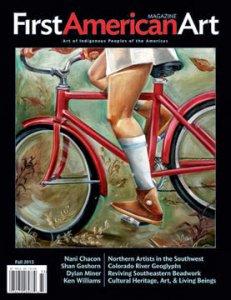 All the books you read, articles that you read, 9 out of 10 of them are written by Anglo-theorists, anthropologists or art historians.  But that’s changing, and so I jumped at the chance.
She gave me the assignment of interviewing beadworkers – I did an article on Orlando Dugi and then another one on Ken Williams. Since I know the medium so intimately I was able to ask deeper questions. In a way, someone who didn’t grow up in it can’t ask the same kinds of questions because they don’t understand how things are done traditionally.  Meredith got a potter who grew up working with clay to do an interview about another potter. So the magazine is going to be something different – I mean, that’s what I want to read.  I want to read what artists are saying to each other.  Both Orlando and Ken are amazing people, and I was really honored to be asked to interview them.
When people find that language and art definitions are limiting, that’s when this magazine can really help.  That’s how having Native voices, Chicana voices, Black voices talking about their own work — that’s where those distinctions get broken down.  Where that learning and communication happens is the bottom line I strive for in everything I do: That moment of contact between me, and the viewer, owner, collector, museum, whoever that is – that point of communication — And whether it’s jewelry or whether it’s artwork – whatever it is — if I can communicate in some way the human experience to another human being, from own perspective, that’s why I do what I do.

We’d like to thank Teri for sharing with us.  You can find out more about Teri through Craft in America and First American Art.  Be sure to stop by Four Winds and see some of her work in person, too!

Teri Greeves’ beadwork resonates with a wide array of people, whether they wear one of her pieces on their wrist,…