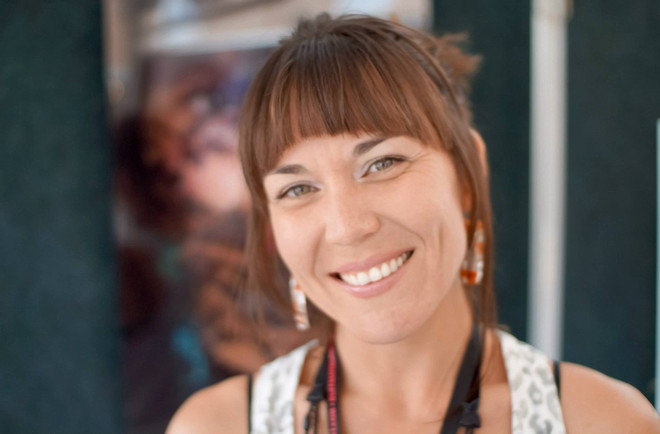 “I draw, I sketch, the final image is pretty concrete before I show up to shoot – but I’ve also learned to show up with an open heart. To let the artwork have a life of its own. Sometimes, if you listen to that voice, the artwork manifests itself through you.”

Cara Romero is a born visual storyteller with a distinctive lens shaped by years of study, a visceral indigenous and non-indigenous cultural memory, collective history, her own personal experience, and a compassionate and keen sense of visual narrative. Her photography – a mélange of fine art and documentary-style – is a sometimes whimsical, often complex interplay of social commentary, adaptation and examination of culture with a distinctly modern indigenous world view. Meant to be experienced from a full multi-verse of perspectives, Cara’s work invites viewers to enter its nuanced visual architecture with an open mind and a willingness to abandon preconceived notions about Native American art, culture, and people.

“Most of my photographs are a reflection of the times in Indian Country. I look for content, I think about content, things that are going on, what’s been done, what hasn’t been done. What is authentic to indigenous voice? How do we see ourselves in the context of pop culture? Where does the answer sit with you?”

Born in Inglewood, CA in 1977, Cara was raised on the Chemehuevi Valley Indian reservation along the California shoreline of Havasu Lake in the heart of the Mojave Desert. Cara currently lives and works in Santa Fe, New Mexico and is married to Cochiti potter Diego Romero.

Cara’s work reflects her diverse training in film, digital, fine art, journalism, editorial portraiture and commercial photography. She shows at both the Santa Fe Indian Market and the Heard Museum Indian Market. She has won several awards including ribbons at both major markets and the “Visions for the Future “ award from the Native American Rights Fund.

Cara uses her photography to broaden perceptions and introduce ideas outside of the mainstream perception of indigenous art. Through her photography Cara captures beautifully composed stories layered with symbolism that can evoke emotion from anyone of any background.

“I realized that a picture says so much. I am a mainstream, indigenous person who lives within pop culture and contemporary society – but at the same time, it’s a really unique perspective that most documentary makers aren’t capturing. I like to hone in on those ideas of where we are at now, in the present day. Making sure to always pay homage to our ancestral ties and our Indian-ness.”

Four Winds Gallery is proud to represent works from her series, “Water Memories.” These powerful, large scale photographs bring awareness to current events as well as the misrepresentation of Native Americans in popular culture while underlining the importance of protecting indigenous communities and preserving their traditions.

In “Water Memories,”  a title suggestive of water’s chemistry and transformative abilities, Cara’s beautifully conceived photographs show an immersed environment where the Native American figures are portrayed under the surface, still and suspended in a drowned landscape. These breathtaking underwater images expose the fragile and essential relationship that exists between people, water and life.

“‘Water Memories’ are photography dreamscapes dealing with Native American relationships to water, the forces of man and of Mother Nature. They are individual explorations of space, memory, and diverse indigenous narratives that are both terrifying and peaceful.”

Bringing honesty and sensitivity to the process, Cara carefully crafts each composition. To create “Water Memories,” she tandem scuba dived with an instructor and encased her photographic equipment in order to achieve the underwater shots she envisioned. She prefers to use friends and family in her artwork as a way around the exploitative nature of photography. Her choice of models has an essential meaning to the photographs.

Of the titular image in the series, “Water Memory,” Romero explains, “I wanted the male and female represented in the photograph to be presently or historically affected by the element of water in the literal sense, so that it would further empower the spiritual connection that Natives have with the water. Here we have male and female Pueblo corn dancers, captured in both a terrifying and peaceful free fall into a mysterious deluge of natural water.”

The models, Rose B. Simpson (Santa Clara Pueblo) and Santiago Romero (Taos/Cochiti Pueblo) had recently experienced flooding in the aftermath of wild fires that raged through their Pueblos; their memory of environmental impact and fragility was real.

“So while it’s disastrous, it’s also very peaceful. It’s a part of the life cycle. Water is cleansing and there’s the spirituality of it, but it’s very frightening like they’ve just been swept off the corn dance line.”

To create a similarly perilous yet eternal feeling image, Cara photographed Cannupa Hanska Luger (Mandan/Hidatsa/Arikara/Lakota) for “Oil Boom.” Cannupa was born in North Dakota on the Standing Rock Reservation, which is presently being affected by both oil and water. The resulting image is a significant and timely manifestation of the importance of water to life, man and nature, and enduring balance.

In “Eufaula,” Muscogee mother and daughter Lisa and Crickett Tiger are immersed in water. Drawing on this representation of the first environment while referencing recent flooding in Eufaula, Oklahoma, Cara comments on the continuity of the cycle of life and the essential nature of water.

Recently, “Water Memory” was featured in an exhibit titled, “From the Belly of Our Being: art by and about Native creation,” at the Oklahoma State University of Art. Her artist statement from the accompanying exhibition catalog reads:

In Chemehuevi (pronounced cheh-meh-WAY-vee), our Creator is a female deity. Her name is Great Ocean Woman (Hutsipamamau’u) and she created all the land and people from her body with the help (and sometimes mischief) of Wolf, Coyote, and Mountain Lion. There are several other female familiars during out early dawn stories. All of the females have great strength and diversity, they range from old to young, sometimes they are desirable, provocative, and dangerous – sometimes they are nurturers and healers with the most powerful medicine.

From a very young age, Chemehuevi women are taught that their innate strength as a woman and life giver is all-powerful, maybe sometimes even supernatural, and we are respected as equals in Chemehuevi society. We hold power in government and historically in battle. This unique perspective shows up throughout my art. It is always my intention to visualize this inherent Chemehuevi belief in the all-powerful, supernatural strength of women. It is a gentle but powerful shift to see Native women portrayed in this way from an indigenous female perspective.

I am deeply committed to making work that addresses Native American social issues and changes the way people perceive Native Americans, especially Native women, in contemporary society. If we want respect, love, and beauty among us and others, we must actively promote it through our art.