Born in 1962, Linda is the granddaughter of Santa Clara Pueblo pottery matriarch Margaret Tafoya and the daughter of Lee and Betty Tafoya. The story of her life has been written through her connection to the clay. Growing up in a family of potters, she has long been exposed to the art form, and she began making her first pieces at the age of twelve. Her father taught her to make the vessels and carve the designs, while her mother taught her the sanding and polishing. Renowned for his firing technique, her father, Lee, showed her how to perfectly fire her pottery a deep black while maintaining its high shine.

Being a descendant of Margaret Tafoya and pursuing a career in pottery requires a commitment to excellence and Linda has risen to the challenge with her graceful, magnificently carved designs. Her polishing work is so exceptional, she has come to be regarded as the best polisher in her family.

During her first marriage, Linda moved to San Juan Pueblo. While her pottery continued in a Santa Clara style, she also began to design pieces that were influenced by traditional San Juan imagery. In the late 1980s, she was one of the first Santa Clara potters to begin using a micaceous slip to complement the polished and matte surfaces of her pottery.

The entire process for Linda is a family experience, from gathering the clay to firing the pot. From this process, Linda has started doing collaborations with her eldest son, Jeremy Oyenque, which has, in itself, become a renewed source of inspiration.

Although Linda has garnered many awards in her long career, including “Best of Division” and “First Place” at the prestigious Santa Fe Indian Market, one accolade stands apart: Early in her career when her grandmother asked to her to see her pottery, Margaret looked it over and then proclaimed, “You do good pots!” 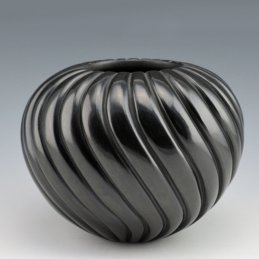 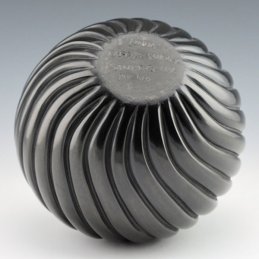