Shane Hendren is an award winning Navajo metal and silversmith known for his high end contemporary jewelry, incorporating traditional Navajo symbols and using various techniques.  Shane was born in 1970 in Gallup, New Mexico on a Navajo reservation about 30 miles south of his current hometown.  Shane’s childhood, growing up on a ranch, provided him with a high work ethic and his family had a great appreciation for the arts which included frequent trips to museums and cultural activities.  This combination gave Shane a well-rounded start to learning and understanding so many parts of jewelry making.  He grew up drawing and painting the world around him and learned that the “quality of a person’s equipment reflected their dedication to their vocation.”  This was primarily directed towards cowboys and their equipment, but can be interpreted in so many other facets of Shane’s life and his respect for his art.

In the summer of 1987, Shane was selected to attend Marie Walsh Sharp Summer Art Institute at Colorado State College and continued on to graduate from the Institute of American Indian Arts in Santa Fe, New Mexico with a degree in Museum Management.  While enrolled, Shane signed up for metalsmithing elective thinking it would be an easy A, not knowing it was going to shape his future.  Throughout this time he learned the fundamentals of metal and silversmithing giving him a solid foundation in jewelry making.   In 1991, the governor of New Mexico honored Shane for his art and academic achievements.  While not completely fulfilled with his museum management degree, Shane decided to continue his education at the University of New Mexico and earned a Bachelor of Fine Arts degree in all disciplines in 1997.

Shane has spent the past twenty five years developing and experimenting with any forms of art, but settled on jewelry making as his primary means.  Viewing jewelry as a “sculpture with a context” gives a deeper meaning to his pieces.  His style has transformed over the years with his use of various styles, but most uniquely his use of mokume-gane, cuttlefish and tofu casting and hollow form construction.  The mokume-gane comes from a Japanese metalworking technique that produces a mixed-metal laminate with distinctive layered patterns resulting in the metal wood grain appearance.

Shane continues to produce one of a kind pieces in his Albuquerque, New Mexico studio and has been recognized for his hardwork and dedication to his craft.  He has had major show awards at Eiteljorg Museum, the Heard Museum, and the Santa Fe Indian Market.  Shane was named three times Artist of the Year by the Indian Arts and Crafts Association and has won countless awards at the New Mexico State Fair.

"I view jewelry as sculpture with a context." 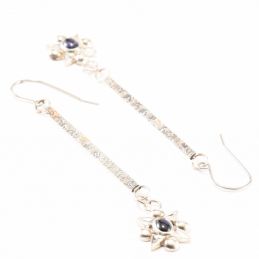