Coochwytewa is credited with the now common practice of texturing the base plate of silver.

His work continually evolved and he learned diamond setting. His work earned many prestigious awards: the Santa Fe Indian Market, the Heard Museum, and the Gallup Inter-Tribal award.

Coochwytewa was named an Arizona Indian Living Treasure in 1994.

This Purple Heart veteran of WWII returned to jewelry making in 1946 after his discharge.

He was the first hopi silversmith to texture the back plate of his pieces which has become a standard in Hopi jewelry.

In the 1970’s he began working in gold and diamonds, another genre stretching technique that garnished him many awards from the Heard Museum, Santa Fe Indian Market, The Gallup, and many other competitions. Success did not distract Coochwytewa from life as a traditional Hopi.  He tended his cornfields every day, reserving afternoons for jewelry, and said that corn was his work and jewelry was his hobby. He probably spent as much time on his religious duties as on his other activities, and was a religious and cultural leader most of his life.  He retired from jewelry making in 2006.

"Corn is my work. Jewelry is my hobby." 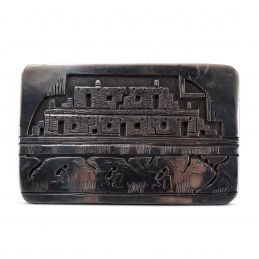