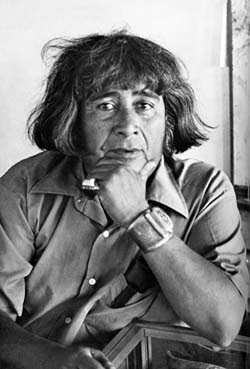 This is a stunning piece in our collection from the master metal smith Charles Loloma. It is a sandcast cuff in sterling with a gold bezel.

Charles Loloma Biography – Loloma was born on January 7, 1921. His father was a Hopi Indian, Rex of the Sand and Tobacco Clan. His mother, Rachel Loloma was from the Badger Clan. His father was an accomplished weaver and moccasin maker and his mother was and excellent basket maker. The Loloma family lived in a traditional Hopi village. Over the years Charles Loloma developed a sense of design, dedication and meticulousness that was considered to be the Hopi way; in which art is not different from daily life. Loloma attended day school as a child. His talents were recognized by his teachers and he was encouraged to draw and paint. Charles finished high school in 1941. By that time he was an accomplished artist in his community and received many commissions.

As many others, Loloma was drafted into the army in 1941. He became a camouflage expert and was stationed in Missouri. From there he spent time in the Aleutians as an engineer. In 1942 he married Otellie Pasivaya. Loloma returned to her village, Second Mesa, after he was discharged in 1945. With the help of the GI Bill, Charles attended the School for American Craftsmen at Alfred University. There he studied design, mechanical drawing, ceramic chemistry and marketing.

Loloma applied for a Whitney Foundation Fellowship. With the grant he studied the clays used by Hopi Indians. Through his experiments he proved that shale clays would turn into a glaze if fired at high temperatures. During his stay at Alfred Loloma also discovered he wanted to pursue an occupation as an artist. He and his wife set up a shop in the Kiva Craft Center in Scottsdale, Arizona. After several years of working with clay and weaving Loloma decided to try making jewelry. He continued to make and sell his jewelry in his shop. He was a self-taught silversmith. Loloma did find some help in a book called The Navajo and Pueblo Silversmiths. Loloma’s early work was mainly cast objects designed in a traditional Hopi fashion. Loloma also taught part-time at Arizona State College and in Sedona during summers. He was able to formulate ideas on design and gather information on selling and marketing through these various experiences. Loloma and his wife were the first Indians to successfully run a pottery shop. Because of this they received attention that inevitably helped their business.

In 1962 the Institute of American Indian Arts was founded. Loloma was appointed head of plastic arts and sales departments. Loloma traveled to Paris in 1963. While in Paris, his jewelry was modeled in fashion shows and exhibited in private shows. After this visit he returned to the Institute in Santa Fe where he remained until 1965. He then went back to his village in Hotevilla. Soon after his return he divorced his wife and remarried. He built a studio in his home and continued making jewelry.

Loloma received many awards and prize and is represented in numerous collections nationwide. In 1972 he was featured in two films, one called Three Indians and the other, Loloma. Loloma passed away in 1991and his studio no longer produces jewelry. 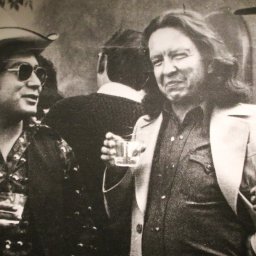 The Heard Museum Indian Fair and Market: Appreciating the Past, Envisioning the Future
29 Mar 2018