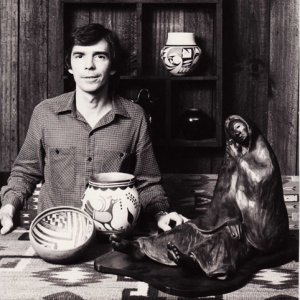 October 16, 2009 Four Winds Gallery celebrated 35 years as one of the finest galleries in the country devoted to Native American Art. In 1974, John Krena left the security of his job at a Weirton steel mill and set out with friend Jody Vignale to pursue a passion for Indian art. Opening at 5535 Walnut Street as Four Winds Trading Post, the gallery has grown to represent today’s top Native American artists and is respected internationally for the presentation of exceptional historic materials. In 1981, the gallery moved across the street to its present location at 5512 Walnut Street and in 1991 expanded its walls and formally changed its name to Four Winds Gallery. Through many changes to Pittsburgh’s Shadyside neighborhood, Krena continues to own and operate one of the oldest successful, independent businesses in

Friday night was the opening of an extraordinary exhibition of major works specially created by contemporary Native American masters as well as important historical selections provided by the nation’s top dealers. Old friends joined us from as far as San Francisco, Santa Fe, and Phoenix to commemorate the milestone. Renowned Navajo metalsmith Cody Sanderson flew in with a suitcase full of incredible new jewelry and a handmade sterling silver lava lamp, his ode to the 1970s. Long time collector and Four Winds fixture Keith Kappmeyer made a surprise appearance. Fifth-generation Indian trader Jed Foutz and Tad Anderman, owner of Silver Plume Trading Company also made the trip for the special celebration. Anderman was so impressed he raved, “no where has a collection with this much range and quality been exhibited before. These are the highest level works by so many different artists in so many different mediums…”
In addition to showcasing works by such artists as Fritz Scholder, Maria Martinez, Kenneth Begay, Charles Loloma, Roxanne Swentzell, Michael Naranjo, McKee Platero, Pat Pruitt, Maria Samora, Keri Ataumbi, and on and on (and including Bob Haozous, who has not made work for a gallery in over a decade)… a video documenting the 35 years of Four Winds was screened.
Click on the arrow in the bottom left corner of the movie players below to view the video in sections.
Four Winds Celebrates 35 Years
Part 1: 1974-1981
Part 2: 1981-1990
Part 3: 1990-1997
Part 4: 1997-2000
Part 5: 2000-2009
To request a DVD of the video, please contact the gallery ([email protected])
Pictures from the 35th Anniversary show weekend can be viewed on flickr 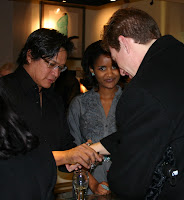