A Closer Look at Eddy Drink

The question of realistic representation in photography is always a point for discussion, as the viewer may assume each photo tells the “truth.”   At the same time, we also understand that even our most seemingly candid photos are often posed and manipulated to get the “best” image.   What is the most effective way to tell the “truth” and what can we learn from the process of fabrication and storytelling?

Art historian and theorist Lucy R. Lippard discusses this topic in Partial Recall: Photographs of Native North Americans.  Lippard points out the difficulty in using photographs of Native Americans during the late 1800s/early 1900s as a learning tool.  In order to better understand Native American life with better historical accuracy, we also need to examine photography and mainstream culture during this time period.

During the late 1800s, photography became more accessible to wider sectors of society.  However, as photography was a particularly new medium, it was very common for photographers to carefully construct images that they thought would be successful. (*which still carries on today)  Often photos were staged, and in the realm of Native Americans, people were commonly asked to pose in such ways that the public viewed them, not as they really were in their daily lives.   While highly problematic, Lippard emphasizes that these images are still of importance in order for us to better understand the expectations for Native Americans during this time period.   She writes, “On the positive side…[there is] the possibility that with fresh interpretations, especially from Native people, new windows into these images will be opened; the lives and beliefs of the people depicted will be released from the prisons of the colonial past into a shared present”(Partial Recall, 14). 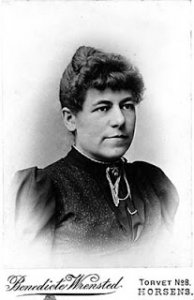 The work of Smithsonian anthropologist Joanna Cohan Scherer illustrates the potential impact that investigating and re-examining historical photographs of Native Americans can have on our dialogue about culture and representation.  In 1984, she discovered that previously unknown Danish photographer Benedicte Wrensted (1859-1949) had taken a large volume of photographs of members of the Comanche and Shoshone tribes (once one tribe) living in Idaho.  These photos were incredible not only aesthetically, but in that they better illuminated the Native American experience during this time period.

The photographs had gone unattributed for years, as some were displayed in various Natural History Museums due to their striking imagery and evident anthropological importance.  The images were not only masterfully taken with a sense of excellent composition and style, but also were some of the few surviving records of Comanche and Shoshone life and dress during the turn of the century.  These portraits were taken of individuals and families as they dressed on a daily basis, lacking the strong imposition of the photographer’s narrative upon the subject.   For a decade, Joanna Cohan Scherer researched volumes of these underappreciated photographs, and identified 84% of the individuals photographed.

While a photograph can never tell the whole story, images like these can help to bring to light otherwise unseen remnants of history. Lippard does caution us to proceed with an awareness that with changing cultural viewpoints, we have been constantly reinventing how we see such photographs ever since a photographer “took” the first Native’s image in the mid-1840s. 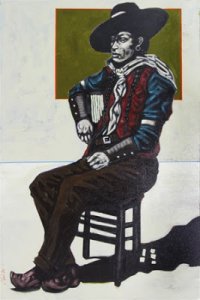 Recently, contemporary Comanche painter Nocona Burgess based his painting Eddy Drink directly on a Benedicte Wrensted photograph of the individual Eddy Drink, himself.  The striking portrait of his tribal ancestor in casual pose captivated Burgess, inspiring him to re-interpret the photograph in his contemporary painting style.  Eddy Drink fits with Burgess’ style and aesthetic perfectly, as his work represents traditional Native American subject matter with updated contexts. His subjects are never frozen in time. Using a minimalist background, vibrant colors and visible brushstrokes, Burgess creates a strong graphic composition. His active role in the documentation and creative process highlights the importance of Native Americans participating in the telling of their own history.

Burgess allows us to view Wrensted’s historically important image, depicting a realistic representation of a Fort Hall Reservation man at the turn of the 20thcentury, through his own unique lens.    His painting encapsulates several layers of storytelling. It helps tell the story of photography and interpretation, Native American life, and our ability to move forward. While interpreting anew does not unlock the secrets of a photograph permanently, it can help us ask new questions and craft new viewpoints from which to examine our world.