Teri Greeves’ beadwork resonates with a wide array of people, whether they wear one of her pieces on their wrist, display it in their home, or view it in a museum or gallery.   We recently interviewed Teri about her history and start in beadworking, the sometimes confining definitions of art and craft, and our ability to communicate through art when we look beyond the medium.

How did you find that you had the amount of patience necessary for beadwork?
I started beading when I was about 8 years old, and I was bead stringing from the moment I could pick up beads and thread.  One of the first big pieces for me – I was probably about 8 years old and I wanted to make myself my own necklace to wear with my dance outfit – it was just bead stringing – a 10 strand, bone necklace.  And I remember that my parents gave me this little container with all my beads in it and I worked on that thing over the summer.  I remember it taking a long time but being really satisfied at the end of it all.  I’ve never been asked that question before but the first thing that came to my mind was having the patience that I had to do that first one.
Is it something you find therapeutic or is it simply just more rewarding at the end?
Part of the personality of someone who can do beadwork or textiles is obsessive compulsive. I definitely have that streak.  I know that because after four hours I’ll go to stand up and not be able to – and I realize I’ve been sitting there for four hours focused like that, without moving.  And I know I’m not the only person that does that.  A lot of people talk about it being therapeutic, and I think the easiest way to relate it to someone who isn’t a beadworker is if you’re a runner or a swimmer or even a motorcyclist, you get on your bike and your head is full of stuff and you go for a ride and then when you come back you’re clear.  That’s kind of how beadworking is.  Because once the design work is done, you’re basically machining color, and that’s the therapeutic part of it. 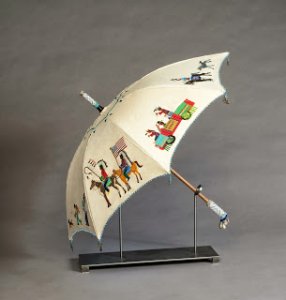 Beadworker.  And still when people ask me what I do, I answer “beadworker”.  Then when I get a confused, puzzled look, I tell them, “artist”.  When I’m in the rest of the (non-Native) world, they ask me what I do and I say I’m a beadworker, and that’s where the confusion comes – that’s where I found I needed to make a distinction and explain that I am an artist with something to say.  And I think with that piece [Indian Parade] I realized that I could speak through that medium. Every single stitch I did on there I did with purpose.  That’s something I can say 15 years later.  At the time, I was struggling with the identifiers, the language that was put upon Native artists. And I was struggling because I wanted to be known as a beadworker because to me, beadworking is like saying, “I’m a painter”.  You’ve mentioned in interviews that when you made your piece Indian Parade on an umbrella, it was the first time you’ve considered yourself an artist.  What made that mental shift for you – and what did you consider yourself before?

The whole issue of craft and art, craft versus fine art, became really apparent to me when PBS contacted me to be included in a program [Craft in America] that explores the idea of craft as art.  That’s when it made sense to me how Native art had been seen as craft and that there was this shift under our feet where people were starting to recognize it as fine art: silver belts and silver jewelry were starting to be seen as fine art. 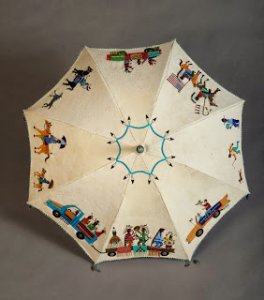 I started to see the nuances in how it was being talked about.  I realized through PBS and the other craftspeople featured that this is something that all craftspeople struggle with.  Somebody that does hand work, where the hand of the artist is required to finish the work from beginning to end – that’s the work that’s kind of been looked down upon- and that’s part of larger art definitions and all that.
I started to think about where my work fit into these larger ideas. I was really conscious of racial distinctions and the way the whole of Native art was ghettoized within larger craft and fine art spheres.
Are there times you can recall that you found the definitions of craft and art really limiting or holding you back?
There have been times when it’s been clear that a viewer dislikes that I’ve used large beads.  Now, the material itself is as valuable as the other material that I use; it’s just that they’re larger.  I need to do that to make large canvases – a 6 foot canvas, for example.  I thought I had innovated in some way in order to do that, so I was surprised when I received criticism for using large beads, specifically.  But it seems that they are only seeing the medium, rather than the composition, the meaning, all the other things that you would look at fine art with – you know, I would never look at a Rothko and be like, “Oh well, he only used acrylic paint…that’s cheap!”
I’m very aware as an artist that my part is to educate the larger audience to look beyond the medium. Look beyond what has traditionally been identified as authentic or real or Native or whatever those words are and to look at it as an expression.
Where do you most want to see your pieces displayed? 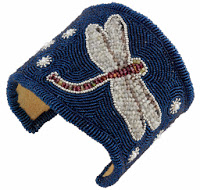 I should make a distinction – I have basically two things that I do: jewelry and art pieces.  And I didn’t realize this until Jamie and Jed at Shiprock did this crazy photograph… an ad in the paper where they had all these amazing Native jewelers and they also included one of my beaded pieces. When Jamie sent it to me, it was the first time I had ever thought of myself as a jeweler. I had always made jewelry, from the get-go I made jewelry, but in my head I had always thought of it as “Those are my little beaded trinkets.” I never thought my jewelry could stand toe-to-toe with all those jewelers, even though I was getting good money for my pieces.

I had always thought more about my artwork. For me – this is how I’ve always done it – I get really intense on a piece or a series of pieces, whatever it is that I’m working on artwork-wise – my heart and soul goes into it, and I feel like they’re babies once their born.  My baby is done, I completed it and then I’ll switch to doing jewelry because to me the jewelry is fun, it doesn’t have as much intense thought.  Although some of it does have meaning, it’s not quite the same. 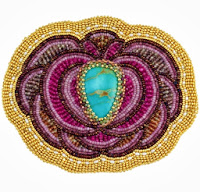 I don’t ever mean to say that jewelry is not art – just for me, in terms of commitment to an idea and intensity involved in the project, my jewelry making is a much lighter process.

But the idea of decorating the human form as a part of feeling beautiful and admired is important to me. When I was growing up, my mother [Jeri Ah-be-hill] had a trading post – my sister [Keri Ataumbi] and I had jewelry since the moment we were born. We came out of the hospital and she put a bracelet on our wrist. Jewelry is a universal form all humans can relate to. I love the idea of creating pieces so people can decorate themselves with meaning and beauty. That is my main goal in making jewelry. 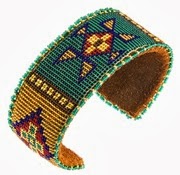 At the same time, I have these other things I want to say, and they can only be said in a certain way with certain objects. When I do the artwork it is oftentimes something that has been rolling around in my head, almost like a thorn in a shoe. It bugs me until I have to deal with it. I have to think about it. I have to research it. And then I have to figure out how I am going to tell that story visually.
For these pieces that aren’t wearable – Would you prefer to see them in homes, galleries, museums?
I tend to run towards the educator in me.  I have this thing that I want to say – I want it to be so beautiful, even if it’s a really difficult subject matter, people are interested enough to walk up to it and try to understand it.  The more people that see it, the more I feel I have helped the understanding between Native America and the rest of the world.  And so my bottom line of where I want things to go – I just want them to go someplace where that communication can continue.
Teri is a fascinating person who can really articulate her perspective as a Native American working as an artist and jeweler today.  Stay tuned for Part 2 of our interview, which we’ll post in a few days! 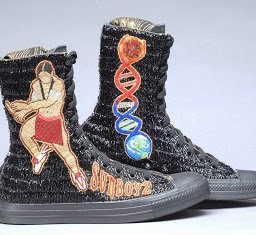 While speaking with Teri, it became clear how her creative process and work reflect the importance of Native American history…