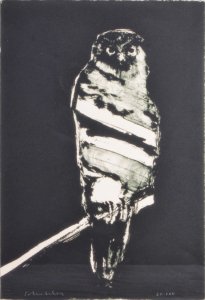 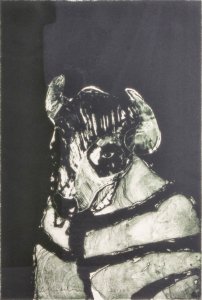 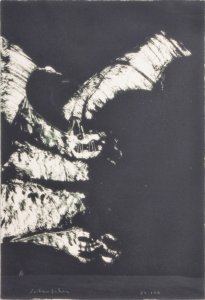 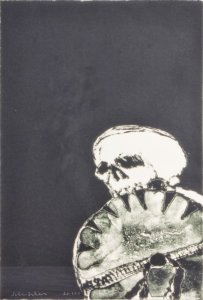 Fritz Scholder has been lauded as one of the great American painters of the 20th century. One quarter Mission Luiseño, he questioned Native American identity and representation in both art and society.
His dark, energetic and often unsettling depictions of Native Americans combined realism, tragedy, and spirituality with the genres of abstract expressionism and pop art. The Smithsonian National Museum of the American Indian in both New York and Washington, D.C. recently exhibited a landmark retrospective of his iconic works.
We feel lucky to have recently acquired Scholder’s Anpao Suite, featuring an owl, bat, buffalo, and death. Surrounded by a dark and desolate background, each subject is enveloped in mystery while expressing a sense of turmoil from within. These striking lithographs showcase these enigmatic white figures against a background of black mixed with a subtle hint of blue. 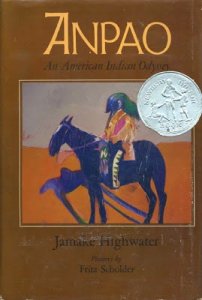 Scholder originally created these pieces as a collaboration and illustration for the award-winning novel Anpao, by Jamake Highwater. Highwater was later discredited for presenting himself as Native American, and his heritage was called into question. Anapao Suite does, however, remain significant as this was the first time Scholder was asked to illustrate a novel. Anpaogarnered serious attention and went on to win several prestigious awards before the full controversy came to light.
Scholder created the the Anpao images to compliment, but not visually recreate the story. Also designing the original cover for the novel, he did not intend for these pieces to be a mirror image of the storyline.  He describes, “The lithographs were done with the narrative fresh in my mind. The images are not literal, for that is the purpose of the text. For me, the owl, the buffalo, the bat, and death are mysterious and magical subjects” (256, Anpao).

Mysterious and magical subjects were a forte of Scholder, who cited Spanish painter Francisco Goya as a strong influence on his work. While not necessarily a direct interpretation, the imagery in Anpao Suite is very likely an allusion to Goya’s The Sleep of Reason Produces Monsters, considered to be a classic in the realm of art history, and has been frequently cited by generations of famous artists.

In Fritz Scholder, William Peterson, founding editor of ArtSpace Magazine, relates formal elements and techniques used by both Scholder and Goya, as well as specifying some of their similar underlying themes. Notably, both artists use a strong contrast between light and dark with course texturing, as well as a bold execution with a sense of spontaneity. He notes that the psychological turmoil explored in Goya’s work is also examined within Scholder’s framing of Native American representation. He observes,
The Indians largely became Scholder’s symbol of human existence under compromised conditions and allowed him to examine the human capacity to either cope with the pressures of the psychic split – or crash out.  Like Goya, Scholder understands that monsters are creatures of repression and the sleep of reason.  (114)
One of the more fascinating components of Scholder’s work is his ability to communicate an unapologetically updated and non-stereotypical Native American experience. The ridiculous and often grotesque results he highlighted in his paintings were a way of communicating the adverse pressures placed upon Native Americans in both art and society.

In an August 1975 issue of Arizona Highways, journalist Marjel De Lauer wrote, “[Scholder] felt that the limitations and restrictions that had been imposed on Indian artists by many Anglo teachers in order to keep the art pure, had also kept it from having any measure of greatness” (15). The pressures of the art world also reflected the strain placed on Native American culture throughout US history.  Scholder chose to reject the pressure to present this “pure” or stereotyped imagery in his work, and encouraged others to do the same.
Anpao Suite is a prime example of Scholder’s iconic style, illustrating his ability to blend different references and worldwide influences into his own voice and message. Like his larger body of work, these four figures illustrate a powerful story of the unconscious.

“An unconscious merging of intuition, discipline, celebration and accident is what one hopes for.”       — Fritz Scholder