+1 412.682.5092
  
By Four Winds Gallery Choctaw Contemporary Painting Kiowa Native American Artists January 19, 2015
T.C. Cannon (1946-1978) has been referred to as the “James Dean” of Native American art, creating a large impact on the art world before his life was tragically cut short. At the vanguard of exploring possibilities for Native American painting beyond the conventional imagery and two-dimensional style of the Studio School, Cannon refused to depict idealized or romanticized imagery in is work. He fused influences from his Kiowa/Caddo/Choctaw heritage, as well as other Native American cultures, with European art history references and worldwide philosophies to depict a current and vibrant Native America. 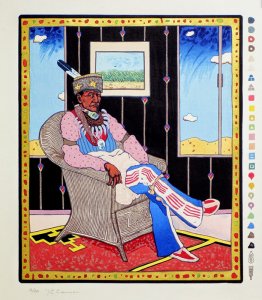 Collector #5, his most famous work, boldly showcases multiple stylistic and thematic elements that are now considered to be definitive components of Cannon’s legacy. A thorough and enthusiastic researcher and meticulous planner, Cannon approached each painting with a clear sense of purpose. For Collector #5, he draws on imagery from the last quarter of the 19thcentury to subvert the notion that Native American culture lived in isolation, separate from contemporary culture and the rest of the world. He successfully emphasizes the Native community’s ability to maintain a sense of identity while integrating and interacting with outside influences.
For the border he uses an eye-catching, glowing metallic gold color dotted with red and green, representing the view ceremonial sun dancers have of the world after staring into the sun. Cannon frequently used this sun spot imagery to reflect the intense prayer or sense of renewal each painting could potentially provide for the viewer.

With an awareness of the surrounding frame, Cannon then invites the viewer to visually explore the depth of the scene. In the foreground, the central subject, a lone, seated figure, is based on a historic photograph of Peta-Leshara, Pawnee Chief, taken c.1870 by W.H. Jackson. Cannon often used historical photographs of Native Americans in order to “purposely mingle elements of tribal and multicultural traditions” (166).

Cannon depicts the seated chief as a collector of European fine art with Vincent van Gogh’s Wheat Field with a Lark, painted in 1887, hanging prominently on the wall behind him. Further, the collector sits on a Victorian wicker chair. Cannon’s meticulous attention to detail was used in rendering the chair, as it was possibly inspired by furniture at the La Posada Hotel, the main building of which was built in 1882. Friends note that Cannon studied several books on Victorian furniture for this specific piece. 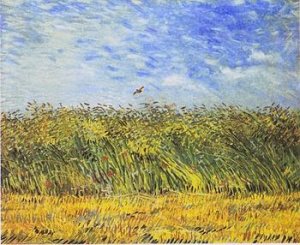 The late 1800s, the time period from which these items date, were a particularly tumultuous time for Native Americans. The government’s attempts to dismantle Native American cultures and assimilate them with the mainstream or remove them completely resulted in the relocation of many Native peoples to Oklahoma. Many tribal structures were decimated and lives were lost. Cannon references this period of assault on Native culture with the view around the central figure. Through two windows, Cannon offers a glimpse of perfectly formed white clouds on a bright blue background, a cloud pattern frequently seen in Oklahoma.
Cannon’s Native chief may be in Oklahoma, but seated in a confidently relaxed position in a lavish indoors setting with the plains behind him, Collector #5 asserts his ownership of the traditional clothing items and regalia often identified with his tribe, as well as the imported items that surround him. Close friend Elizabeth Dear describes Cannon’s drive:

One of T.C.’s main concerns in his own imagery was to show Indians in both a contemporary and traditional sense by juxtaposing them in their traditional Indian way of life with modern elements not only from        modern American culture but from other cultures as well, such as African, other Native American groups, and European cultures (166).

Beyond the historically specific imagery, Cannon also stylistically invokes Victorian era techniques. He demonstrates his appreciation for van Gogh not only through the direct reference to his work, but also by his use of bold, flat color to elicit emotion and depth. Additionally, Collector #5coincides with Cannon’s exploration of Japanese woodblock printing. Post-Impressionists such as van Gogh and Gauguin also looked to Japanese woodblock prints for inspiration in innovating Western painting techniques during the late 19thcentury. While working with Aberbach gallery in New York Cannon was able to collaborate with Japanese master woodcutter Maeda and master printer Uchikawa in 1975 to create a masterful woodcut rendering of Collector #5.
Collector #5is a significant piece in T.C. Cannon’s body of work, reflective of his visionary style which has resonated with generations of artists and collectors alike.