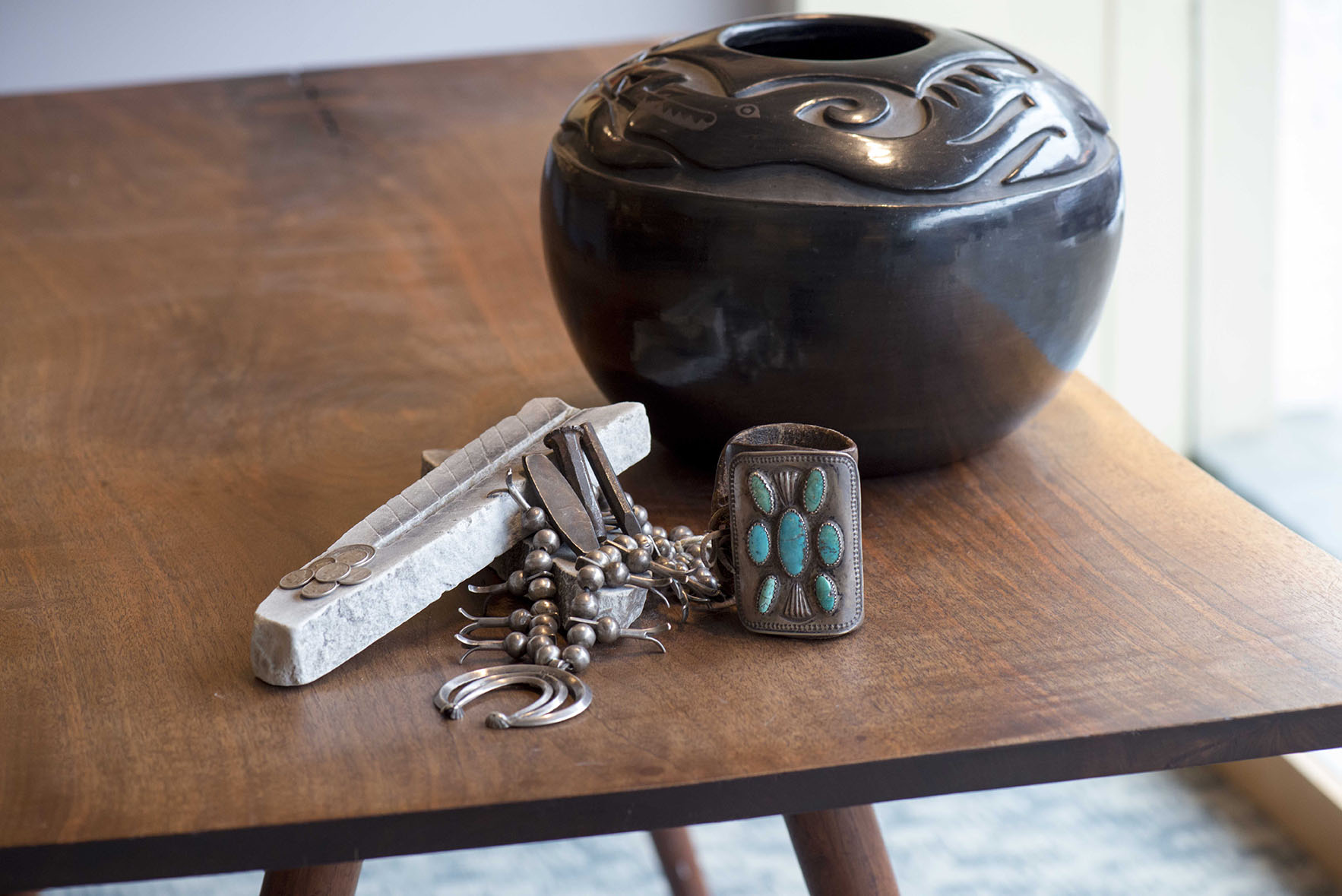 Some students from Winchester Thurston Preschool stopped by Four Winds Gallery one afternoon and spoke with the owner, John Krena, about the intricacies of Native American art and culture.As the children excitedly asked questions, John would show examples of the art and jewelry; when available visual helped to explain the time intensive processes involved in creating these works of art.

John – “Welcome to Four Winds Gallery! We started this business in 1974, so I am probably older than your grandparents”.

Kids – “What are those coins?” 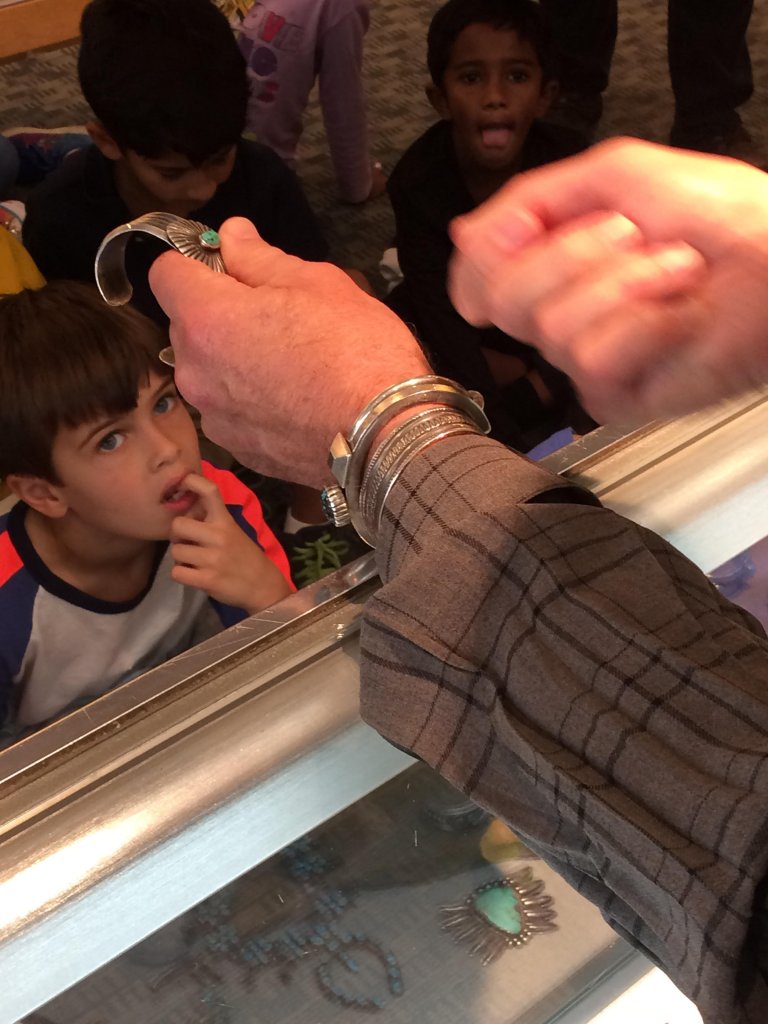 John – “Yes, we have been open for 43 years. Everything you see here is handmade by American Indian artists. I am going to tell you about the coins, you want to know about the coins, right?

John – Okay, I will tell you about them. Is everyone settled? So we’ve been here how long?”

John – “We started out with a tiny little store here on Walnut Street. We weren’t sure if people in Pittsburgh would be interested in art by American Indians because it was unusual to have in Pittsburgh. It turned out people loved it, they became very interested. Everything here, everything you’re looking at, the paintings, the pottery is all made by hand. Everything made by hand, all by American Indian people. Many of them live traditionally, they still live on reservations, so they have a completely different culture then you are living in right now.

Teacher – “Have you guys heard of States like Arizona, New Mexico?”

Teacher – “My family lives in Arizona, that’s where I am from, and every time I would come in here…I’m home, this is comfortable to me, Four Winds brings me home every time I am here.

John –  “All of this is made in New Mexico and Arizona, because that is where the largest concentration of Native American People are living now. The young man, Perry, asked about the coins…”

John – “These coins, here I’ll show you, I’ll hold them up. These coins are called mercury dimes. They were regular money, but they have a higher silver content than we have in a dimes today. When the Navajo people started making this jewelry, they would get coins and Mexican pesos, and they would melt them and then pound the silver out into a sheet.  I’ll show you something very old….this is called ingot silver. This is made from ingot silver, this started out just being coins like I showed you and was melted and pounded into a sheet. Then they do all this work with files, stamps and hammers to create designs on the jewelry. Native people would take an old railroad tie or old nail and hand make a stamp and then pound that design into the silver to decorate their artwork. The stone you see in almost everything is called turquoise. It comes out of the ground from mines, like a coal mine here, but turquoise is a beautiful blue stone, and is sacred to most Indian people”.

John – “Well….I give the people money and they give me the jewelry. This is how a lot of these artists make their living. This is what they do for a living, their job is to make jewelry. So they will hand make the jewelry, then they sell it to a person like me who has a gallery or store, and then I sell it to ….your parents.”

Kids – “What are all these blue things made out of?”

John – “That is all turquoise, that’s all that stone I was telling you about that comes out of the ground.”

Kids – “But some of it looks different.”

Teacher – “Sometimes turquoise can have a greenish color.”

Kids – “How much does all this cost?”

John – “How much money you got on you Jack? 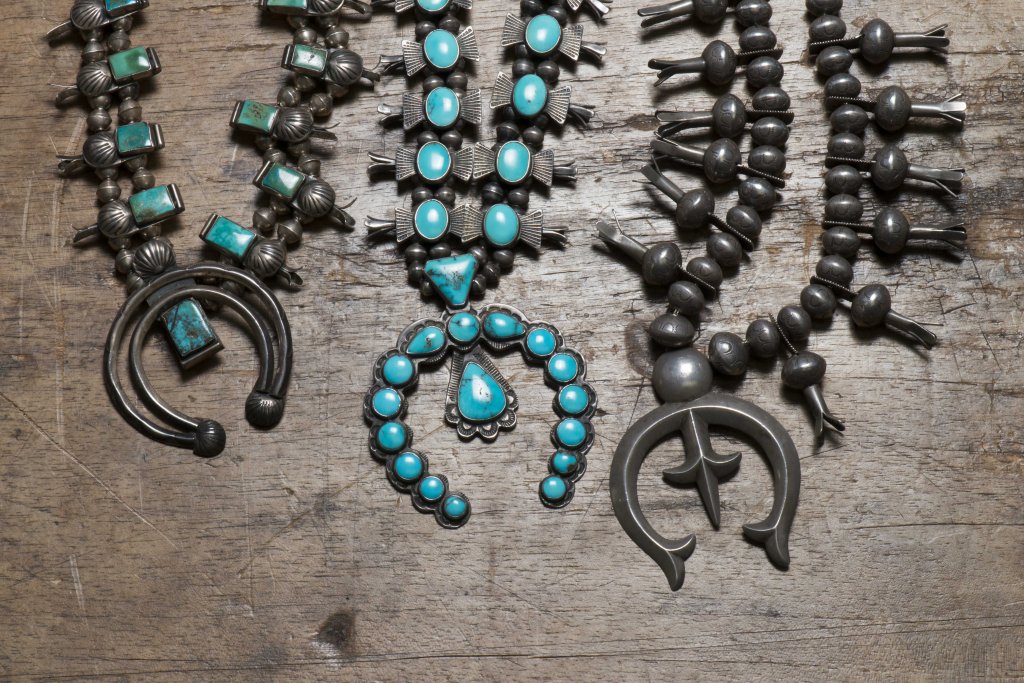 John – “This is called a squash blossom necklace, so this kind of thing is what an important Native American person would wear, this would showcase value. American Indians wouldn’t want a rolex watch, they wouldn’t want a diamond ring, they wouldn’t want any of those things. They would much rather have something like this. This is a symbol for wealth and beauty for these people. The pottery you see, you see how beautiful and shiny?”

John – “ They dig the clay out of the ground, and anything that has a painted design they make the paints out of different…”

John – “Yes! Plants, berries and minerals. They fire the pottery outside…boy we have a lot of questions, okay….Lola, go Lola.” 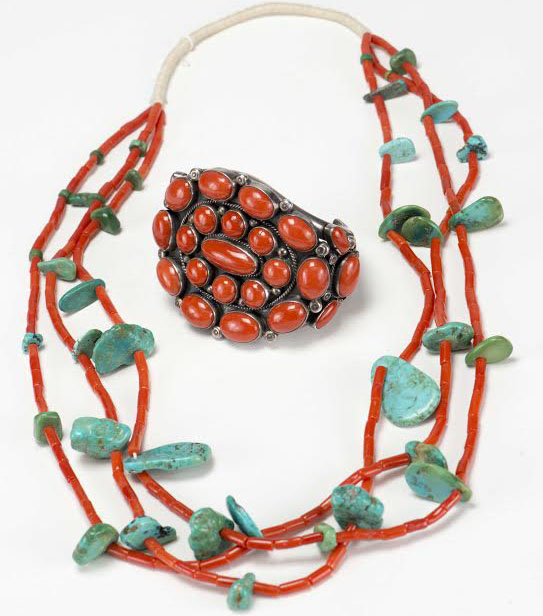 Lola – “What is that orange and red?”

John – “Thats coral, that comes out of the ocean, it comes from the Mediterranean. Lauren?”

Kids – “That same necklace what is it called again?”

John – “It is called a squash blossom necklace. Next question, my man Henry.”

Henry – “What is this, all of this turquoise and then some parts of it are not really blue?”

Lauren – “What are those things over there?”

John – “See, this goes like this, so if a person was shooting a bow and arrow it keeps the arrow from hitting their arm. It was also used to show your wealth. A wealthy native person wouldn’t necessary have a lot of money, they would have beautiful objects instead. These objects are more important to these people than having money in the bank.

Kids – “All of these animals are so cute!”

John – “Yes, see all the little animals, everyone look on the shelf behind you, those are called Zuni fetishes. They are made by…..”

Talking and commotion from kids

John – “Okay everyone, I need your attention. Fetishes are done by one tribe, the Zuni. These little carvings were used for hunting and healing ceremonies. For example, if you got sick you didn’t go to the doctor, you went to a Medicine Man. Let’s say you’re pretty sick, and the Medicine Man goes, “I need a little help to make this child better.” Someone would carve him a little bear and he would use the strength of that bear, bear strength, to help you get better.”

Kids – “What is the brown on the turquoise and what are the, what’s this snake?”

John – “The brown is what I told my man Henry about, that is the matrix, that’s the copper running through the turquoise. This little snake guy, you’ll see him also on much of the pottery. He’s a water serpent, many of the Indian people live in areas where there is not a lot of water, like in the desert, water is very important in the desert. So they call this guy Awanyu the water serpent and they use him in different ceremonies to help them find water.

Teacher – “We have one final questions as a group, what do like about being here on Walnut Street?”.

John – “Oh, this the only street in Pittsburgh!”

John – “No really, it’s the only place to go to find something unique and it always has been that way. When we opened in ’74, when we were going to open a gallery, I didn’t look anywhere else. I knew the gallery needed to be here on Walnut Street. We had a second location downtown for about 30 years, but our home is here on Walnut. People looking for something unique have always come here. I think it’s the most vibrant street in the city. 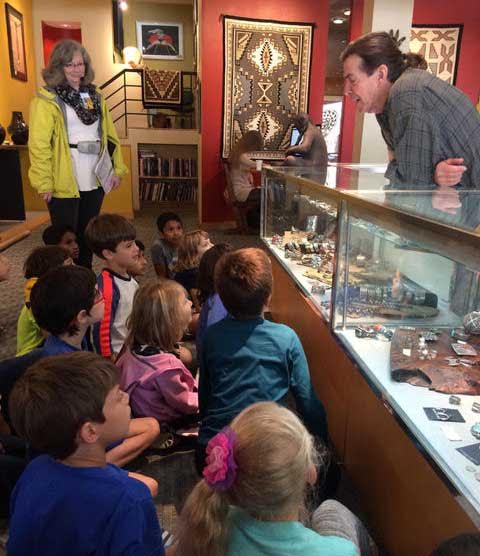 Teacher – “These students have a special connection….they know Mrs. Vignale…

John – “They know Mrs. Vignal! Okay! Mr. Vignale is not here today, but Mr. Vignale, Jody, is my business partner. He helped to start Four Winds.

Teacher – “That is Mrs. Vignale’s husband.”

John – “How many of you know Mrs. Vignale? Almost everyone! Her husband works here with me in the gallery. He’s my partner, but he took the day off. You guys better behave in Mrs. Vignale’s class.”

Kids – “Is that black pottery, the second to last, on the top, is that carving in the pottery?”

John – “No, that’s not a guitar, that is the same water serpent just like on the other pottery. Last question, who wants the last question?”

Kids – What is all of these different colors and carvings…”

John – “What are the Zuni Fetishes made out of? They are made out of all different stones and shells. The Zuni people would find things in their area that they could use to make the carvings.”

Teacher – “It is time for us to go now. Can everyone thank John and Four Winds for their time?”