+1 412.682.5092
  
By Four Winds Gallery Exhibits Native American Artists Navajo News November 20, 2013
We would like to thank Shane Hendren and Jed Foutz for a great show! It was an honor to be able to host both a talented jeweler as well as a knowledgeable trader; not only did they bring exceptional material, but their stories were a real treat for the Pittsburgh audience. We especially appreciated their perspective on Southwestern Native American art culture as it continues to evolve. 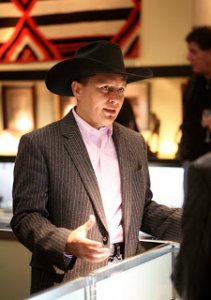 Visitors loved getting to know Shane and hearing more about his creative process.   A first-generation jeweler from an artistically inclined family, he sources all his turquoise from the US and does his engraving by hand.   His meticulous attention to symmetry is evident in his work.
Shane has a unique life perspective and attitude, and told us some wonderful stories from his time in the rodeo as well as his various world travels.  Shane considers his jewelry his legacy and only makes a limited amount of pieces.  As a ‘one man band,’ he takes care and consideration with each of his works. 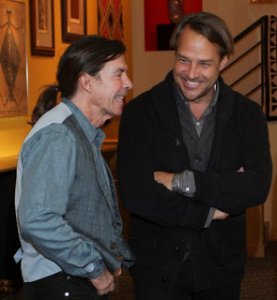 Jed Foutz’s lecture was a big hit as well.  We learned about his fascinating family history working within the Navajo reservation for five generations.  He spoke about the personal relationships that he has developed with top Navajo weavers, and expressed the nuances of the trader and artist relationship, reflecting on how the symbiotic system has developed over the years. His father, Ed, had a different style of selling and trade, while Jed has come into his own in how he conducts business. 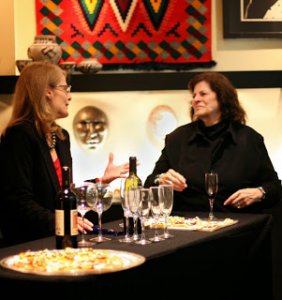 Jed told a touching story about the special moment he shared with his friend Anita Tsosie when she realized her weaving won Best of Show at Indian Market in 2004. He encouraged Anita, who typically devoted an entire year to complete one weaving to immediately sell, to enter her work into the juried show. Reluctantly, she entered her weaving, and when she walked into the awards ceremony and discovered her piece covered in celebratory ribbons, she was overcome with emotion. She then sold the piece to a couple for more than double what she originally had humbly thought she could charge for her work. Jed reflected on how proud he was for her to know the value and respect people felt for her artistry.
Jed also fielded questions from the crowd, one of which was, “As times change, will there still be Navajo weavers?”  Jed noted the ways in which the traditional trading post system is in transition and how the number of Native weavers has declined significantly even since his father’s time in trading.   However, he believes that there will still be weavers who continue the tradition, creating and working within an entirely new system. 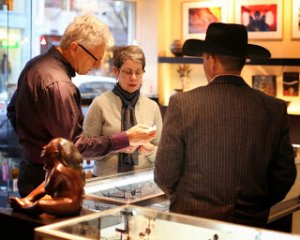 Both Jed and Shane touched upon how this is a very transitional time period in which artists and historians are currently redefining how we look at art originating in Native American culture. With an already rich and interesting history, it is very exciting to look forward to what will come in the future.